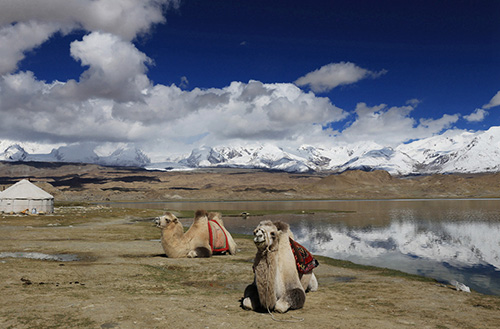 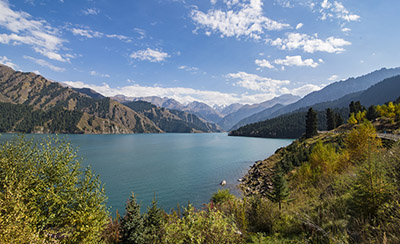 Activities: Drive to Heavenly lake in the morning and visit Xinjiang Provincial Museum in the afternoon
Our guide and driver see you at the hotel lobby and Leave for Heavenly Lake after breakfast which is 115 kms (71 Miles) over two hours by vehicle. Your stay at the heavenly lake is your time to ride horses, go boating, take photos or simply trek around the lake for as long as you like. You can eat lunch together with a local Kazak family or just pay them a visit! This is certainly the easiest way to understand the life style of the Kazak people in such a short time. In the afternoon, visit the Xinjiang Museum which houses an impressive collection of exhibits, covering artifacts and relics from more than 12 minority groups. It is a great opportunity to review what you have seen within last one week 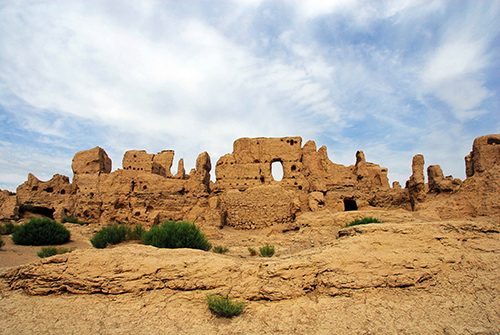 Ativities: visit Idikut (Gaochang) ancient city, Astana tombs, Toyup village, Bizeklik Thousand Buddha caves and Flaming Mountains.
After breakfast, drive to Turpan on the first class highway for about 2.5 hour. Once you arrive in Turpan first check into the hotel, then we start our wonderful day in Turpan beginning with a visit the Ancient city of Idikut (Gaochang). The city was first built in the first Century BC and later became capital of the Idikut (Gaochang) Uighur Kingdom in the 8th Century. You can take a donkey cart to visit the site if you like. We’ll stop in the city for about 40 minutes and then drive to Karakhoja Astana tombs, a Tang-dynasty burial ground which also known as the “Underground Museum”. Astana means “capital” in the Uighur language and Karakhoja is the name of a legendary hero of the ancient Uighur Kingdom who conquered by killing a vicious dragon. Moving on, we journey to Toyup village, an old, beautiful and timeless village with a friendly Uighur community. Here we visit several local families and eat lunch with a local family in their home. This could quite likely be the highlight of your tour. After lunch we visit Bizeklik Thousand Buddha caves which used to be an important center for Buddhist worship under the Xizhou Huigu government of the Idikut (Gaochang) Kingdom. Finally, on the way back to the hotel we will stop at the Flaming Mountains which people claim are so hot and dry that “flying birds even a thousand miles away dare not to come” . Later, we’ll eat dinner in the Oasis hotel restaurant and the round the day off with an atmospheric song and dance festival in the famous grape valley. Stay in Turpan 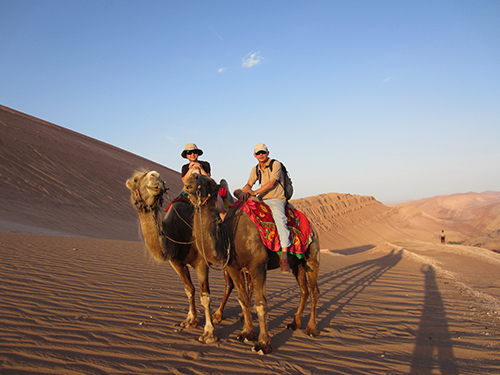 Ativities: visit Yargul (Jiaohe) Ancient city, Karez underground Irrigations system and Emin Minaret. Drive to Korla
Following a hearty western breakfast at the Hotel we start our another wonderful day in Turpan. Our special itinerary today includes sightseeing in Turpan and drive to Korla after Lunch. First we visit Yargul (Jiaohe) Ancient city which is one of the best preserved ancient cities in China. The ruins of the buildings are divided into temples, civilian dwellings and government offices. Workshops and residential houses in the streets are still visible and time there is time spent in a world long disappeared. After an hour of walking around the city area, we’ll push on to see the world famous Karez irrigation system, unique to this part of the world. The system is considered as one of the three great projects in China with the other two being the Great Wall and the Grand Canal. Then visit the Emin Suliman minaret which is a magnificent combination of ancient Uighur and Islamic architecture. It is the tallest ancient pagoda in Xinjiang and the only Islamic ancient pagoda in the country. Locals call it “pure tower.” After lunch we’ll leave Turpan to korla. it is about 400km from Turpan to Korla and it takes about 6 hours by car. Arrive in Korla in the evening and stay overnight. Stay in Korla 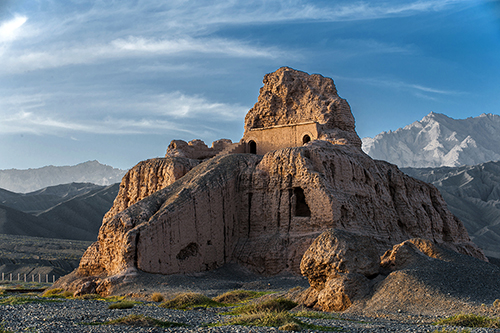 Ativities: Drive to Kucha (Kuqa) and visit Kucha old city , Grand Mosque, Bazzar , Subash ancient city and Kizil Kagha Beacon tower
Leave for Kucha after breakfast and arrive by lunch time. After lunch we’ll spend time at Kucha old city area which is a lovely community of friendly Uighur people. The Kucha’s grand mosque is located in old city area and the mosque itself was built in the 17th Century, is the only to contain Shariya law (Islamic Court) in China. This roof of the mosque was constructed using 300,000 eggs & cement and bricks. Then we’ll visit the Ancient City of Subash dating from the 2nd -3rd Centuries as well as the ancient Kizil Kagha Beacon Tower which was once an ancient military outpost. Stay in Kucha 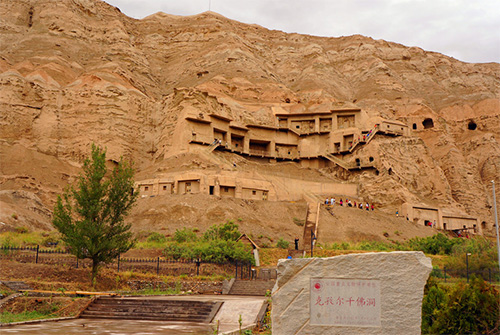 Ativities: Drive to Aksu and visit Kizil Thousand Buddha caves on the way
Check out the hotel and leave for Aksu via Baicheng County. On the way we visit the Kizil Thousand Buddha caves which sit high on the cliffs over the Northern bank of the Muzat River, 75km (46miles) from Kucha city. The caves were hewn between the 3rd and 8th century and form one of the earliest Buddhist art treasure troves in China. In fact the caves were in use one century before the famous Mogao Grottoes at Dunhuang. Here we will have lunch and continue driving until Aksu. Along the way, we drive through many rare and interestingly shaped mountains and we can stop for photo any time you like. Arrive in Aksu by dinner time and check into Aksu Stay in Aksu 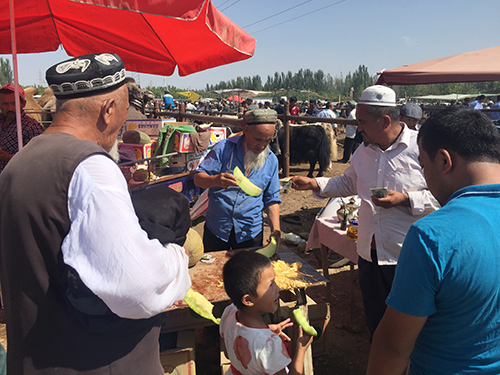 Ativities: Driving to Yarkant, Visit Xinjiang’s largest, Non- touristy village market, Serik Buya Market.
At 7.30am local time we set out for Yarkand and at Serikbuay great market for a few hours. The market is regarded as the second largest market in Xinjiang after Kashgar Sunday fair and happens every Thursday. Importantly, Serikbuya is less modern than Kashgar Sunday Market and thus maintains a more stable connection with the past. You won’t be disappointed. Following lunch in a clean local restaurant, we’ll keep on driving until Yarkand where we’ll check into the Yarkand Hotel. Dinner in the hotel restaurant Stay in Yarkant 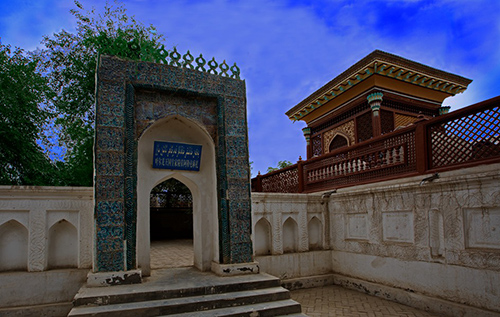 Ativities: Visit Altunluk grand Mosque, Amannisahan tomb, Yarkant Royal graveyard, Qiltan tombs and old city area. then drive to Kashgar. also visit Yingsar knife town on the way.
Yarkand was once the capital of several Uighur Kingdoms in ancient times and a vital station on the old Silk Road. Its history tops more than 2000 years which makes it an extremely interesting city to visit. After breakfast enjoy the local culture and do some sightseeing. For example; Golden Mosque (built in 1533) and its graveyard including several hundred year old tombs and Old City. Whenever you’ve had enough we will head back to Kashgar with your guide and driver. On the way to Kashgar, we can stop in the ‘knife town’ of Yengisar town, well-known for its hand-made knives. Here you can visit a local knife factory and see the artisans in action as they sculpt another perfect tool. Arrive in Kashgar by dinner time and check into the Hotel. Stay in Kashgar 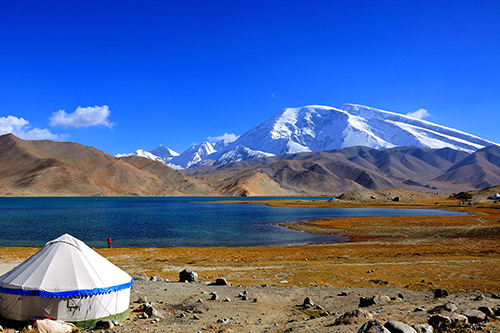 Ativities: Drive along the KKH, Stop at Opal Village, Oytagh Kunlunshan Colorful mountain range, Gaz Valley and check point, Bulungkol Valley (white sand mountain), Karakul lake and local Kyrgyz family visit.
Our experienced local guide and driver will pick you up from your Hotel at 7:00am local time or any desired time you wish, before we set out along the Sino Pakistan Karakorum Highway which is one of the most beautiful highways in the world. After an hour of driving we stop in Opal village to buy fresh fruit and Naan bread and finally enter into the surreal glaciated scenery of the Karakorum Highway. Entering the world of the Kunlun Shan is an opportunity to experience one of the last truly unezplored places on Earth. The hues and colours of some of the world’s highest mountain ranges dominate every horizon on your journey towards Karakul Lake – The Kunlun Shan is known to contain 148 different kinds of minerals. About 125Km from Kashgar City, we must stop to check passports at a checkpoint before stopping at an ancient Caravan Sarai (former camping place for Silk Road Caravans). Karakul Lake lies not long after Bulong Kol （Corner Lake）valley which has amazing scenery of White sand with the reflection in the lake. On the way keep a sharp look out for Kyrgyz Nomadic herds, small mountain and the hued mass of Sandy Mountain all accented by the high colorful peaks of the Kunlun mountain range. By lunch time we reach Karakul Lake and have lunch at a lake side restaurant there. Besides the lake, you’ll have the opportunity to experience the surrounding culture. We’ll visit a local Kyrgyz family in their unique homes called yurts and take time out to ride horses and camels around the lake and surrounding scenery. Back to Kashagr in the afternoon. Stay in Kashgar 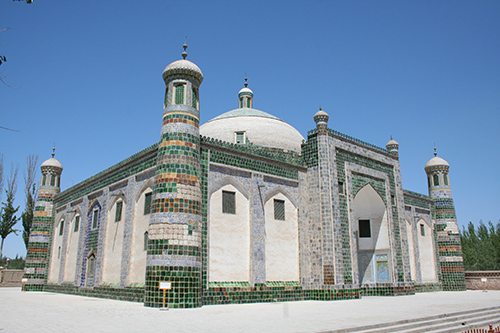 Ativities: visit Idkah Mosque, Apak Hoja Mausoleum, Livestock market, Main Sunday bazaar, old city and local family dinner.
Explore the rich, endless culture of the Uighurs in Kashgar.First visit Livestock market which is the most interesting and traditional part of the Sunday market, then push to the largest bazaar in Central Asia at the Kashgar Sunday Main Bazaar, then spend time by the Id Kah mosque, the largest mosque in China and marvel at the intricate architecture of Kashgar’s historic Apak hoja tomb. We’ll also spend time today in the Kashgar old town and have dinner with a local Uighur family. Stay in Kashgar

End of the tour

Ativities: see you off Kashgar airport.
Today is the last day of our tour, but it needn’t be the last. We strive to make every day of your time with us one that you’ll always remember and if you’d like to book a longer tour please Contact us for more information

Based on two pax private tour, 10795 Yuan RMB per person

3-Day Dunhuang Tours Include Camping In The Desert